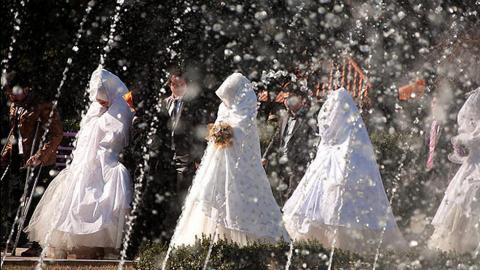 Official Iranian government statistics show that tens of thousands of girls under the age of 15 are married off by their families each year in Iran.

The numbers may actually even be quite higher. Many families in Iran do not register underage marriages, or do so illegally, according to attorney Shima Ghoosheh, who spoke to the International Campaign for Human Rights in Iran.

On August 17, 2015, Majid Arjomandi, the head of Emergency Social Services at Iran’s State Welfare Organization,said that uninformed families tend to marry off their daughters before they reach 15. “Unfortunately that’s the reason why in recent years 360 girls under 14 have been married and ten of them were under 10,” he said.

However, Arjomandi’s statistics are dwarfed by other reports. On August 18, 2015, the Shahrvand newspaper published areport that put the number of registered underage marriages at more than 40,000 in 2014 alone.

Lawyer Shima Ghoosheh told the Campaign that the official marriage age for girls is 13, because the government considers them to be sexually and mentally mature. “Thirteen-year-old girls can legally get married. But even if a girl is under 13, her father can ask a judge’s permission for her to marry,” she said.

Ghoosheh added that it is more important to raise social awareness before raising the legal marriage age to 18. “If people aren’t culturally prepared, and unaware and mistrustful of children’s rights, they will break the law,” she told the Campaign.

Based on latest charts published by the National Organization for Civil Registration, Shahrvandreported that the highest number of marriages in 2014 took place between men ages 20-24 with women ages 15-19. In the same year there were 11 marriages between girls under 15 years of age with men between the ages of 55 and 59.